The Importance Of Knowing Your VALUE! 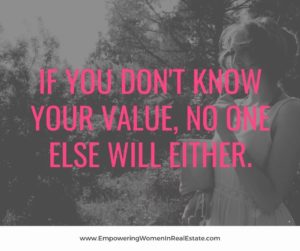 Earlier this week I went on a listing appointment.

Nothing unusual for me. In my 17 year career (primarily as a listing specialist) I’m sure that I have gone on close to 1000 of these appointments (if not more). But this one was different, and I left mad. Big mad.

I knew going in from the initial phone call that this seller was going to be difficult. I was VERY firm with him on the phone. To the point that my husband, who overheard the conversation, commented on my directness (as it pertained to commission). I didn’t want to go, and I should have listened to myself.

The walk through of the property went okay, but the presentation part, not so much. I had listened to him go on about the house for an hour, but he couldn’t bare to hear my presentation for 5 minutes. Constant interruptions, “I already know that”, “I read that about you online”, blah, blah, blah.

Then we had a “discussion” about how my industry is going away. That the role of the Realtor® isn’t important and once you figure out how to handle getting people in homes, that we will be obsolete. He basically saw zero value in anything that I would provide, and took my detailed marketing plan for his property and essentially just starred the professional photos and said that was all that really mattered and was all it took to sell the house. Now this may be true in some markets and for some types of property, but not for this one, and my comps and market data (which he would barely listen to me review) showed that.

He’s probably not alone in his thought process. There are media outlets and some in our industry even who are putting all their stock in technology, and bypassing the people. The sky is falling as they say, and we best get out the way.

Yesterday I watched Brian Buffini’s Bold Predictions. As usual he did a great job of sharing NAR and economist data and interpreting it. One statistic that I couldn’t help but pay attention to … of all of the transactions done last year, only 0.2% (that is two tenths of 1%) were done through an iBuyer or similar type format … you know, that technology that is on the precipice of running us all off the cliff. In addition, the number of transactions that were done without a Realtor® were at an all time low.

Something else that I loved … when looking at survey results and statistics of people polled about optimism with our economy and the housing market, those in rural areas had the highest levels of optimism. Why is that? Brian’s answer was because those in rural areas tend to have more limited access to media.

The media that tells us that we are becoming obsolete. The media that last year was all abuzz in the real estate industry about an impending recession. The naysayers that want us to believe that technology will replace people and yet while today’s consumer is more sophisticated and has access to more information, more consumers are using professionals than ever before.

Good news doesn’t sell. Bad news does. Fear is a powerful thing. It sells newspapers and tickets and systems and apps and so much more.

Don’t believe the hype. Be informed, be involved, pay attention, but don’t start cowering when the cries of “the sky is falling” start swirling about. Focusing on that instead of focusing on your business will derail you faster than anything else. Yes, change will come. It always does, it always has. In what form, who really knows. What I do know is that people will always need a place to live. The way people look for homes, sure thing, that has changed. When I started in business when the buyer said, “I found my new house myself”, that was really saying something. Now, of course they did, they’re supposed to (Brian said that, by the way). Will a computer completely replace a Realtor® in the future? I don’t know. Did the automatic dishwasher replace your need for a kitchen sink? I can’t really see it.

Stay engaged. Keep an open mind. Try new things. Respect your colleagues and the industry. Know your value. If you don’t, no one else will either.