Plan of the Week … Sort of!

It’s Monday!
Normally I would be sharing the Plan of the Week with you here, but I have decided to shake things up a bit!
For over a year now I have been sharing these plans, which are based on the Client Care Program that I have used to build my business over the past 18 years and to help my team members (35 amazing women!) to grow their businesses as well. It even became the foundation of our Empower Coaching program which will be a year old next month!
But I’ve been feeling that sharing the Plan of the Week in varying formats in multiple places was getting to be too much (remember, my word of the year is simplify!). Plus, with more of you benefiting from the coaching content you were getting multiple versions as well.
When the quarantines started in March I made the decision to suspend payments for our coaching members to help alleviate some stress. Then I really felt led to open up the program to anyone who wanted to benefit from the coaching and content and was willing to do the work … for FREE, and there has been a great response. If you love the Plan of the Week and don’t want to miss it, then join us over there. It is absolutely free. Just search for “Empower Coaching by Karen Cooper” on Facebook and request to join.
So, I will no longer being sharing the Plan of the Week here (at least for now). Now to ponder what I will share on Mondays. What would you like to see? 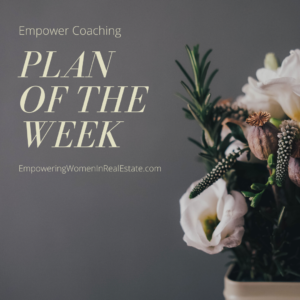