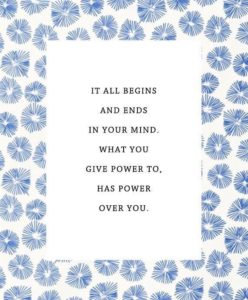 I’ve often had a tendency to be an over thinker, and when I overthink I talk myself out of good things, out of taking action, out of doing the things I know I should be doing. The things I NEED to do.

It really does begin and end in your mind. If you focus on what could go wrong or on what isn’t exactly right (standby … giving myself a pep talk for what I know I need to do later today), then you will never step forward, you will never have the opportunity to even see what could happen or come from something. Tweak as you go. Improve future versions, but don’t not do it because it isn’t perfect. (Now, somebody remind me to re-read this around 10:30 this morning.)

About 2 months ago my business partner Vicky Noufal created a new mailer that she is sending out to parts of an area that she farms. I loved her idea and we discussed that I needed to do the same, and planned to do the same. Only I haven’t done it yet. Why? Because it isn’t exactly the way I would like it. Some of the words aren’t just as I would say them, there has been a lot going on with the holidays, etc and it felt overwhelming to think about, re-write, re-do, and so what have I done? Nothing. What has Vicky done? She is on her 3rd round of her mailer, even though we’ve discussed some edits that SHE wants to make. She has done it, sent it, even though for her the words aren’t just right either, and what has happened as a result? She signed a listing yesterday from someone who received her mailer.

Now here’s the thing … what is my concern with the words being just right? That it won’t work? That someone won’t respond to it? Obviously as Vicky experienced that didn’t matter, and besides who am I to judge exactly what someone else will and won’t respond to? You won’t know until you do it. What I do know for absolute certain is that by NOT doing it, nothing will happen. Nothing. No result. No calls. No appointments. No listings. No new buyers. It is better to get started, to send it as is and at least give myself the opportunity that something will happen vs. guarantee that nothing will by not doing it.

Okay … I feel better now. I plan to tackle this as soon as I get to the office this morning. What do you need to stop overthinking, obsessing, trying to perfect that you need to just do already? Do it today and comment when you are done and I will do the same!