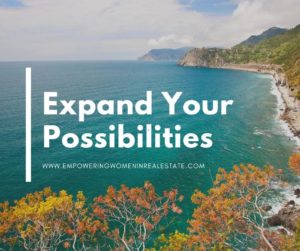 Recently I was watching an episode of SuperSoul Sunday with Oprah Winfrey on the OWN network (I think you can also find the episodes on Facebook and Netflix).

She was talking with Bradley Cooper about his experiences with the movie, “A Star Is Born”. This was a relatively new experience for him, something he worked on for several years, writing, directing, and acting in the film.

Oprah asked him how he thought this would change what he did moving forward. What he said was so powerful.

He said that this has expanded his view. That prior to this experience he tended to operate in one way, doing what he was comfortable doing, and staying in that space partly because of fear. Pushing outside of his comfort zone showed him what more was possible, and expanded his view of what he could do in his career.

Imagine though if we do push outside of our comfort zone. Imagine how much more of the world will be opened up to us? I’ve seen this in my own life and my own career. Every time I have pushed past the fear to try something different, to go in a different direction, to try something a little bit new, not only have I often succeeded, but more importantly, my view of what was possible for myself expanded. And those times when I failed, I learned so much, and it opened up so many more possibilities to me that it never felt like a failure, or at least not for very long.

Where could you use an expansion in your life?