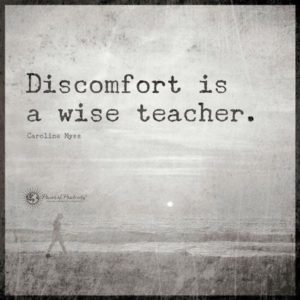 I had a very humbling experience this week, but like all uncomfortable experiences, it was a great reminder of quite a few lessons.

Last weekend while some of my holiday pop bys were being delivered (I pay someone to deliver them for me, probably not as perfect as me doing it myself, but the job gets done) I get a text from my “Santa’s helper” that there is a for sale sign (with an under contract rider, no less) in front of one of my client’s houses where she is delivering a gift. Ouch. (She delivered the gift anyway.)

(Insert all the mad and hurt feelings here.) I’ve been in this business for almost 15 years now, and I’ve certainly lost clients before, and will certainly again, but it is still a fresh hurt every time. This one didn’t seem to make sense. I had done another transaction for them in the early part of this year (sold an investment property for them). They had been invited to all of our client appreciation events this year, received a monthly mailer and email from me as part of our Client Care program, even received other pop bys. They were receiving listings from me and checking them regularly. Note though that they hadn’t responded to anything.

So I waited a day or two, then sent an email letting that know that we saw the sign when we dropped off the gift (obviously they know this, awkward for us, and I’m sure awkward for them too … they are very nice people so no doubt they feel uncomfortable), congratulated them on their contract, and asked for feedback. We had (I thought) a great transaction earlier this year, had talked about their next steps, so why did they not choose to work with me again?

They responded very politely, and I appreciated their frank and thoughtful response. What it all boiled down to was communication. They felt “In the dark” during the transaction, and while they were sure I was doing a lot behind the scenes, they didn’t know what (if anything) was going on. Double ouch.

Now one of the things I pride myself on, and have throughout my career, is my communication, particularly with my sellers throughout the listing process. It’s even part of my presentation. This client came to me by way of a colleague who was in the midst of a significant family emergency (the client knew what was going on). My work load essentially doubled over night, and we were all reeling from the severity of the situation at hand. They definitely didn’t get my best during our transaction. While I spoke with them often (we had a difficult tenant occupying the property), much of it was reactive (them reaching out first).

Several lessons for me, which were great reminders, and hopefully will help you too …

1) Communication is KEY throughout every single transaction. Even if you have nothing new to report, your client still needs and wants to hear from you.

2) “Stranger” clients will be less forgiving. Had this happened with some of my own sphere, referral or past clients and we were working on a transaction together during this challenging period (and I was with several) they likely would (and did) forgive a less than ideal level of communication and not take it to heart as we have a history where they know my true level of service. With someone completely new, you have to work even harder to prove it and lay that foundation of trust.

3) Staying in touch is great, but it can’t all be done passively. Now there is no telling if anything would have been different if I had called them periodically, but at least maybe it wouldn’t have been a shock.

4) People will not always (in fact, likely rarely) have the hard conversations with you. I had NO IDEA they felt that way throughout the transaction. I thought it went great, it was a tough sale that got done when other units on the market didn’t move, felt like a success to me. Settlement was bright, fun, lots of laughing and joking around. At no point did I ever hear or have a clue that they were less than satisfied.

While it’s uncomfortable and frustrating that this happened, I was reminded of a lot of things that I know, and it is good to have a fresh perspective.

Has this ever happened to you? Did you get feedback from the client as to why? What did you learn?