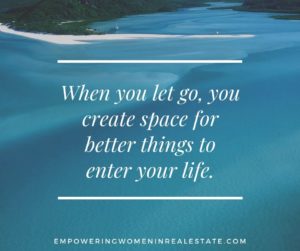 Today, I would like to tell you a story about underwear.

This story is an oldie, but a goodie, and one I have told here before. I was reminded of it yesterday during our team meeting. We were talking about the need sometimes to let people go. Bad clients (I’m in the process of trying to fire two …), toxic relationships, we’ve all had them. Oftentimes, especially when we aren’t as busy as we would like in our business, we hold tight to them afraid to let go. Afraid that we won’t have enough, but that fear, those feelings are really holding us back, and when we let go, we open up the opportunities to something better, to more.

My story begins one morning a year or so ago as I was getting ready for work. I pulled a pair of underwear out of my drawer that I had only worn maybe once or twice (I was a little past due on laundry, which is why I was considering them as a viable option!). They were beautiful, excellent quality, a little expensive, and even though I had had them for a couple years they always got pushed to the bottom of the drawer because they weren’t very comfortable.

After getting dressed I immediately regretted wearing them. I was uncomfortable all morning and it seemed that as the day went on, the more uncomfortable they became. That day I found myself being crabby, and having trouble focusing. Finally when I couldn’t take it anymore I went to the bathroom at my office, took them off and threw them away (luckily I was wearing pants that day!). Immediately, I felt better. What had I been waiting for all that time? For a situation I knew wasn’t good for me to get better? It didn’t get better, it went worse as time went one. Once I let go I was then able to focus and had a great, productive afternoon.

Here’s the moral of the story … how many times do we hold on to things that aren’t working for us? I didn’t get rid of those underwear before because I spent a lot of money on them (and thinking I would like them, I originally bought more than one pair in different colors). Every day I would see them in my drawer, and move past them to something else. Feeling a little guilty each time, thinking that maybe one day they would work for me. You know what? It’s been a year or more since this happened, and I couldn’t tell you what they looked like or why they even mattered to me at that time.

Does this sound familiar? How many things are you dealing with in your life and in your business that you know aren’t working for you? You know it’s a bad fit, you know it was the wrong decision, but you hang on to whatever it is feeling badly that you spent the money and time on something that doesn’t work. You try to convince yourself that the problem is you, and maybe one day when you do or are “x” it will work for you. In the meantime, you bog yourself down with extra stuff, guilt, clutter and clients that you KNOW are a bad fit. Holding tight to what doesn’t work.

Just let go. One day is now, it is today. Let go so your hands will be free to pick up something else, something that will work for you. When you let it go, you will feel so much lighter, so much better and then be able to focus on being productive and moving your life and your business forward. You aren’t the problem. Accept that whatever it is … the wrong CRM, the wrong planner, the wrong lead generation tool, the wrong client, the wrong brokerage, even the wrong underwear … it is just that, wrong. For you. That doesn’t make it bad, or mean that is isn’t great for someone else. It just isn’t right for you, right now. And that is all that matters.